The Best New Cars Released in 2017 in the UK

2017 was a great year in many ways, and there was plenty of cars worth waiting for. Throughout the year, we at Just Vehicle Solutions are on the edge of our seats waiting for the next release and were left thrilled when looking back at the UK’s new cars for 2017.
From sports cars to SUVs and hatchbacks, now that 2017 is over we have plenty of options in terms of new models. Struggling to decide which 2017 car you like the look of? Check out our useful guide below to finding the perfect vehicle…
Best SUVs released in 2017
SUVs, the perfect vehicles for adventure and winter driving. Like the idea of driving one of the latest, best SUVs of 2017? Take your pick from one of the below models…
Land Rover Discovery 2017 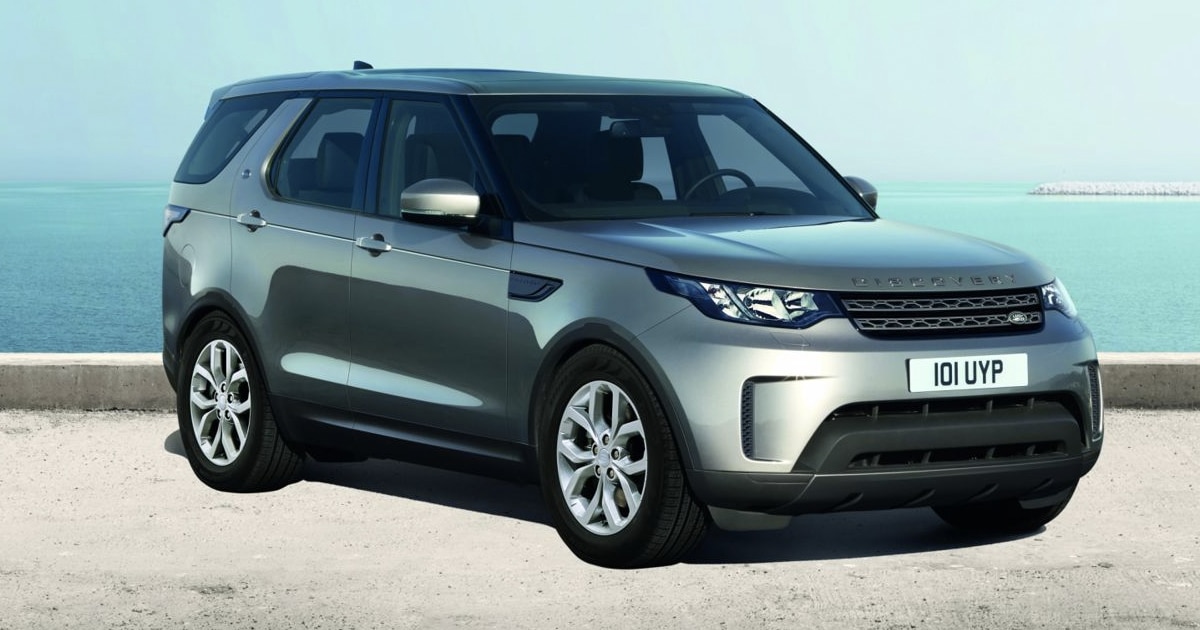 The All-New Discovery had a lot to live up to after the success of previous versions of Land Rover’s ever-popular model, and it certainly delivered. Achieving a five-star Auto Express review, the Land Rover Discovery continues to be an “off-roading legend”.
If you seek a premium SUV, this fifth generation, seven-seat Land Rover is the ideal choice.
Alfa Romeo Stelvio 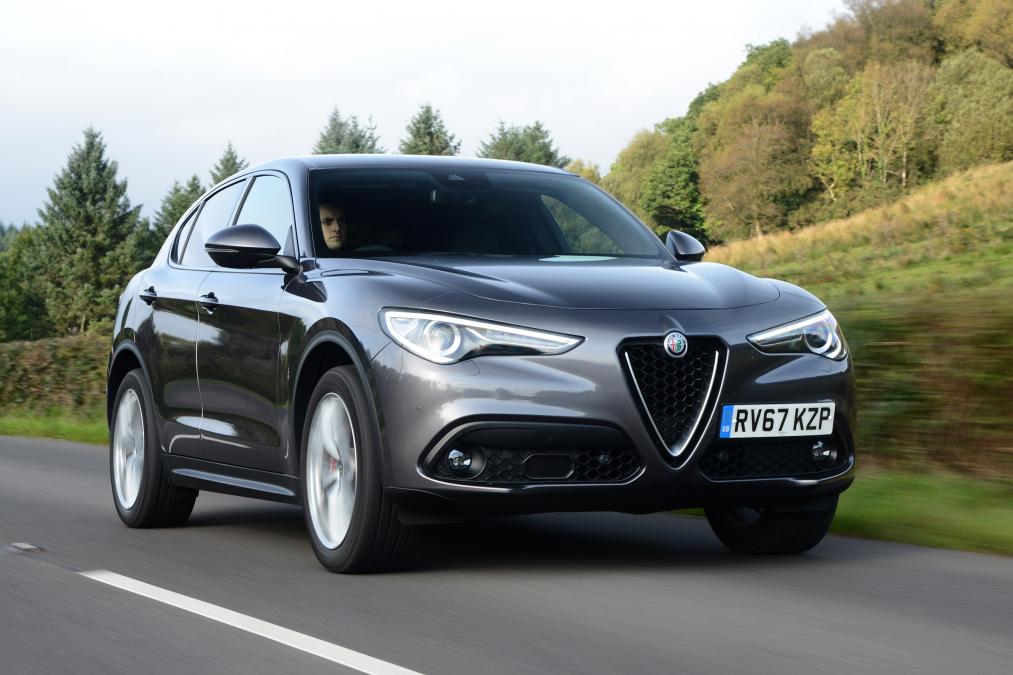 Alfa Romeo say that the Stelvio, otherwise known as their first ever SUV “draws inspiration from the legendary mountain pass linking Italy to Switzerland.” It’s fair to say that the automaker has pulled off the cool, slick and adventurous aesthetics of their muse.
This 2017 SUV was very popular last year thanks to its enjoyable driving experience and fantastic engine selection.
Jaguar E-PACE 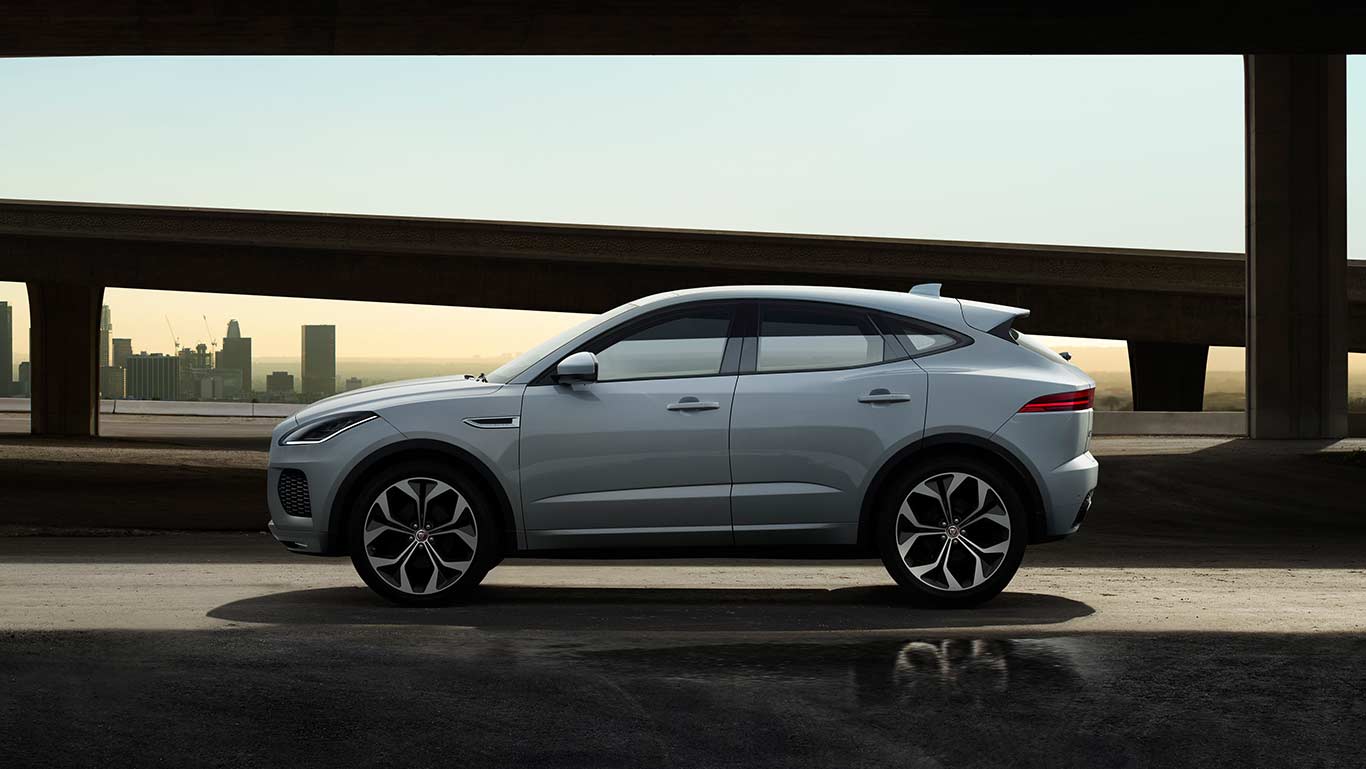 Another debut for a popular brand, the E-PACE is Jaguar’s first ever compact SUV. Boasting the sporty, dynamic and distinctively Jaguar looks of the brand’s other models, the E-PACE delivers a “driver-focused cockpit” and combines that with a range of family-orientated benefits and features.
The E-PACE is a more affordable and compact alternative to the F-PACE, but what it lacks in size, it certainly makes up for in style and practicality.
BMW X3 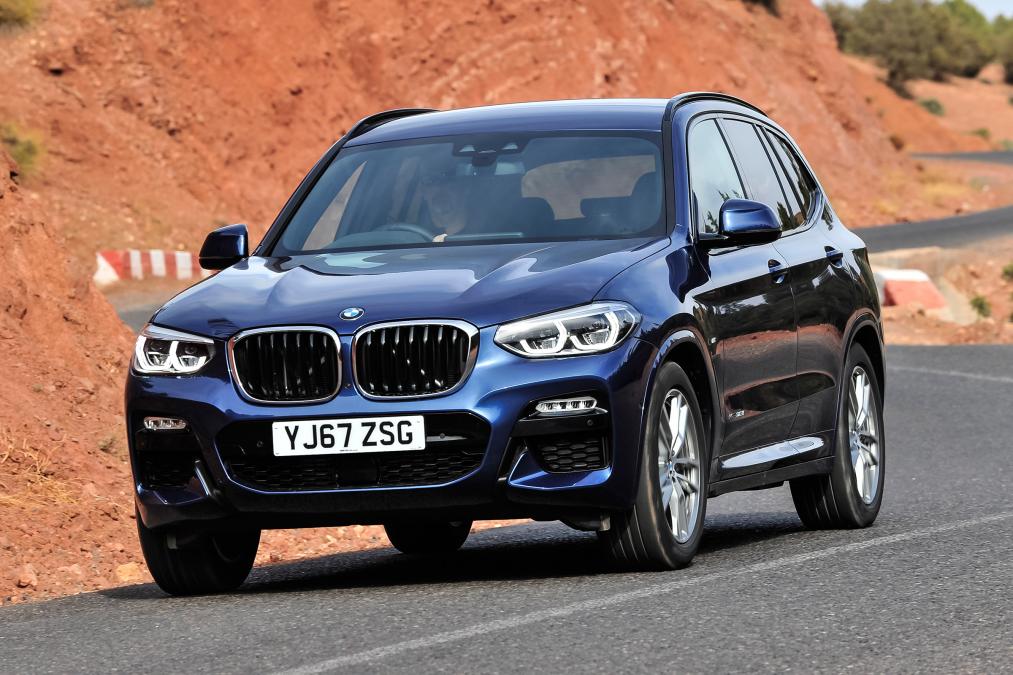 When planning this blog post, we agreed on three vehicles per category, but the BMW X3 is such a sublime 2017 SUV, we couldn’t simply ignore it.
The premium SUV market is extremely competitive these days; the likes of Jaguar, Audi and Land Rover all have worthy entries, but the BMW X3 does take some beating.
Updated with new styling, tech and capabilities, it’s no wonder the X3 was voted one of the best by Auto Express.
2017 Sports Cars that were Worth the Wait
Whether you’re in the city or a country road, there’s not much that beats being behind the wheel of a dynamic sports car or convertible. Here are some of the best 2017 sports cars to have hit the roads last year…
Kia Stinger GT-S 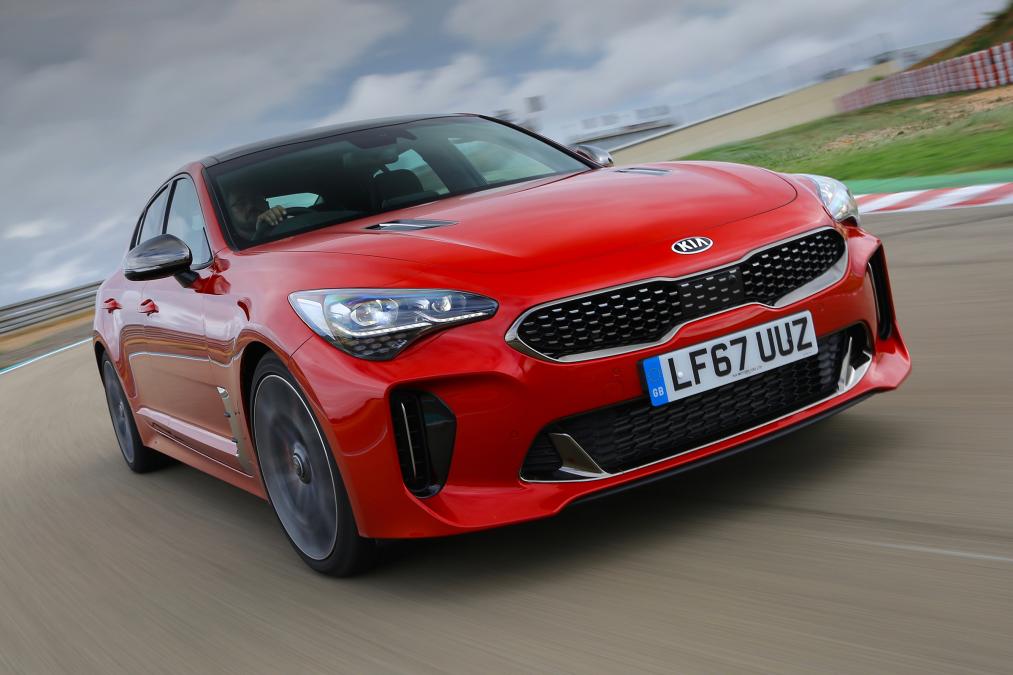 Whoever said “first the worst” was lying about the Stinger GT-S. Kia’s first attempt at what Auto Express call “a potent sports saloon” is certain to turn heads when zipping down motorways thanks to its sumptuous design and 365bhp 3.3-litre twin-turbo V6 engine.
You’ll love the sound of speed that comes from the Stinger’s impressive performance levels, and its spacious cabin and tech are extra bonuses.
BMW 530d M Sport 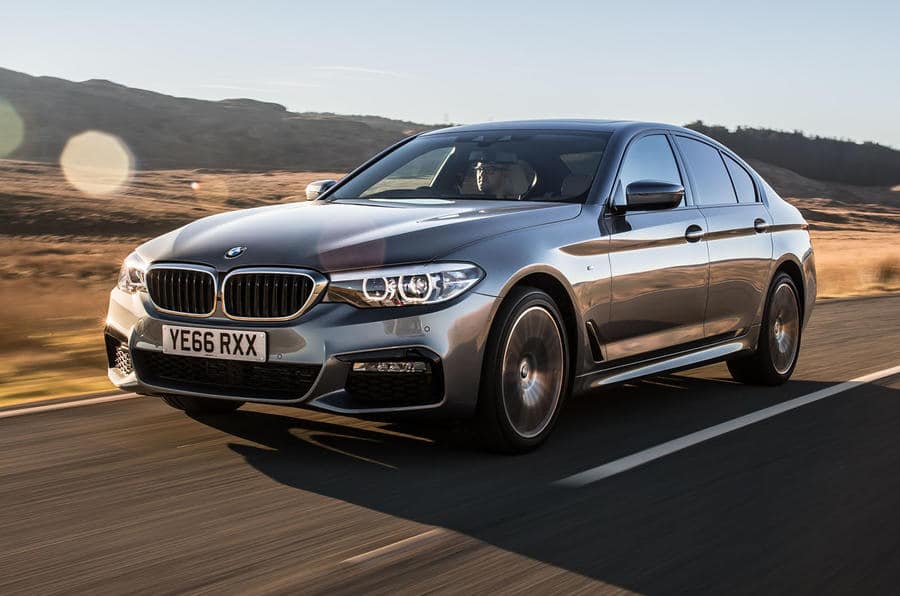 Sport by name, sport by nature… The BMW 530d M Sport deserves its place as one of 2017’s best sports cars thanks to its classy exterior and luxurious interior.
A strong engine and smart interior full of the latest tech and deluxe design and comfort features make the BMW 530d M Sport a real force to be reckoned with.
Mercedes-Benz E-Class Coupe 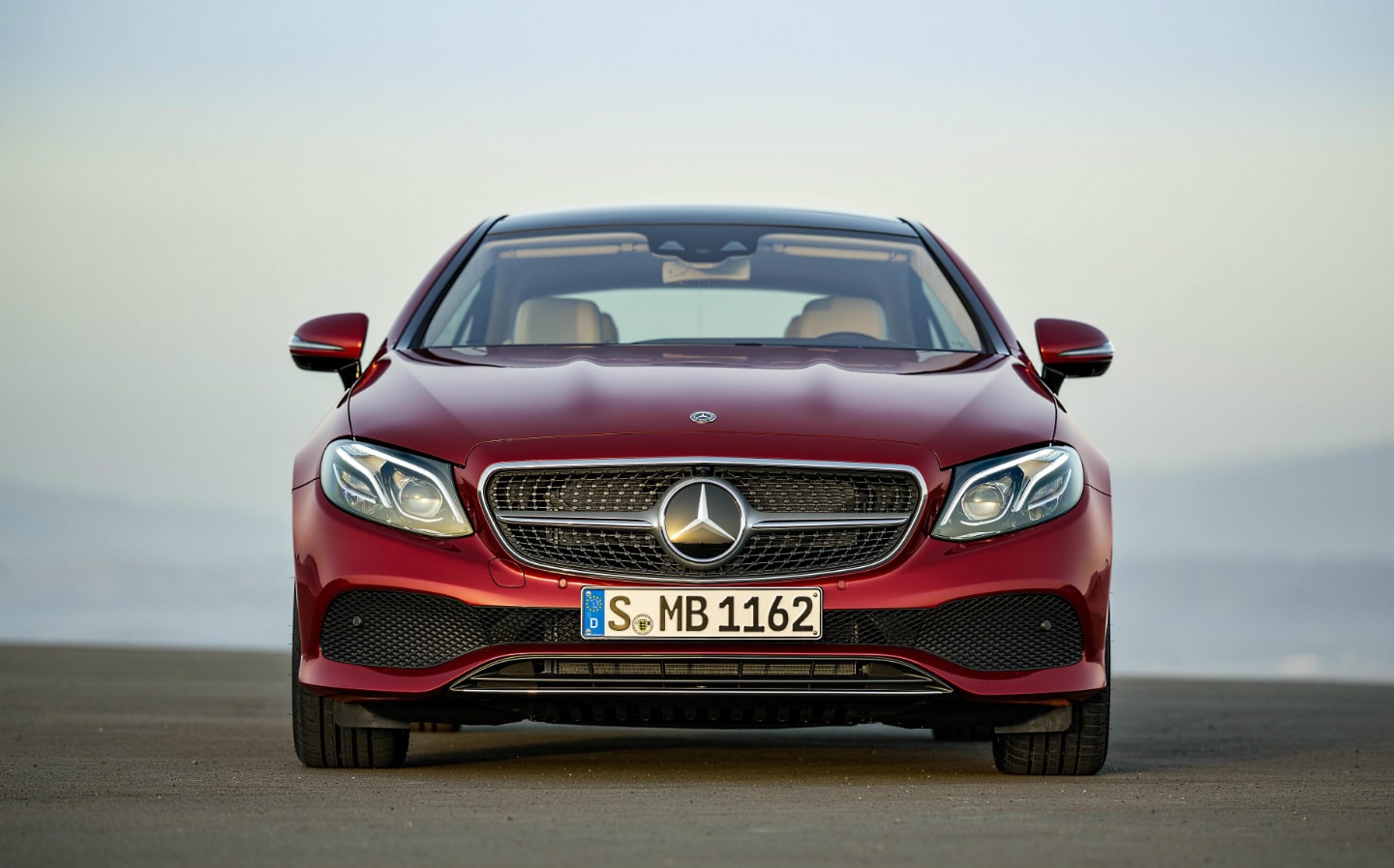 “It’s a 3-litre V6 that produces hundreds of horsepower and a mountain of torque. And yet somehow it makes no noise at all.” Those were the words used by Jeremy Clarkson to describe the Mercedes E-Class Coupe.
Now, it’s worth noting that Clarkson did have a few criticisms of the 2017 sports car, but overall, we love it. The interior of the vehicle has the opulence and class of a Great Gatsby party, but the technological power of what we can only compare to a spaceship.
Best Small Hatchbacks 2017
If you seek a reliable, affordable and smaller vehicle than those mentioned above, you ought to explore the option of a brand-new 2017 hatchback.
Before discovering the best lease deals on new cars, check out what we believe are some of the most impressive 2017 hatchbacks currently available.
Hyundai i30n 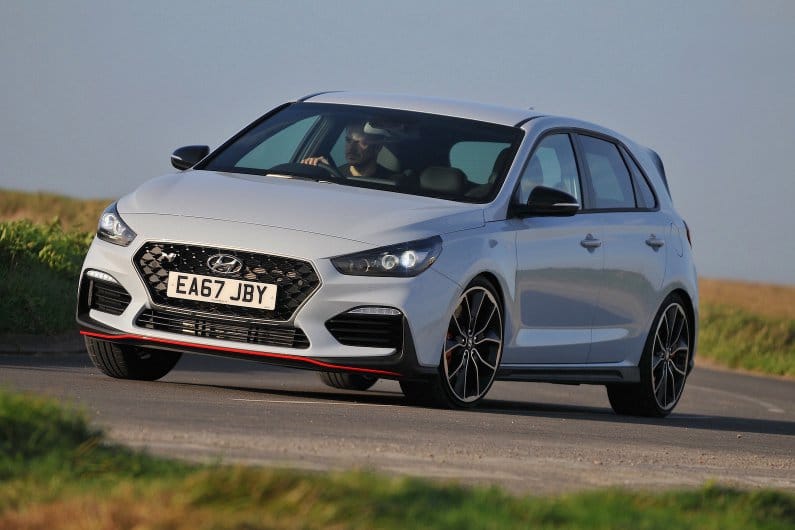 Awarded a four-star rating by WhatCar and Car Magazine, the Hyundai i30n is absolutely a formidable option in the hatchback sector.
With a 2-litre turbocharged four-cylinder petrol engine, there is plenty of power behind this exciting 2017 hatchback. In terms of the interior, the Performance edition reins superior, with unique, electric-controlled sports seats made from a combination of suede and leather.
One look at the interior and you’ll fall in love with the Hyundai i30n!
Volkswagen Golf 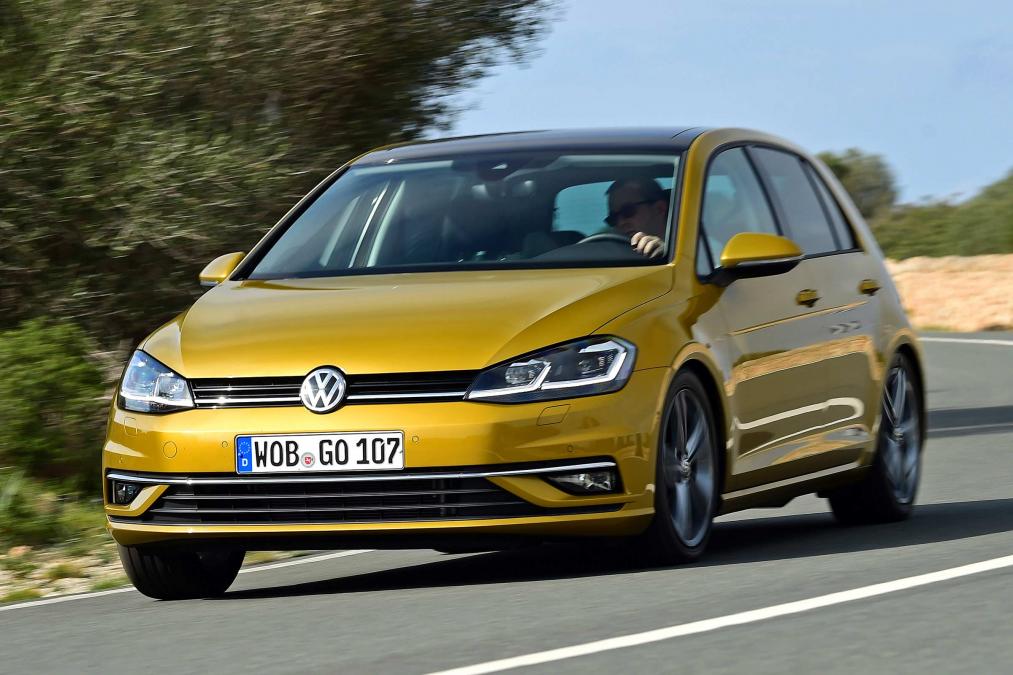 An ever-present in the hatchback market, the VW Golf always promises a refined driving experience, as well as a spacious and smart interior. It’s no wonder that “it’s the car that Top Gear staffers tend to recommend when asked ‘what should I buy?’ more often than anything else.”
Often described as having “something for everyone” thanks to its variety of trim, colour and engine choices, the seventh generation of Europe’s best-selling car has experienced a bit of a facelift, as you can see from Auto Express’s review.
2017 Vauxhall Corsa 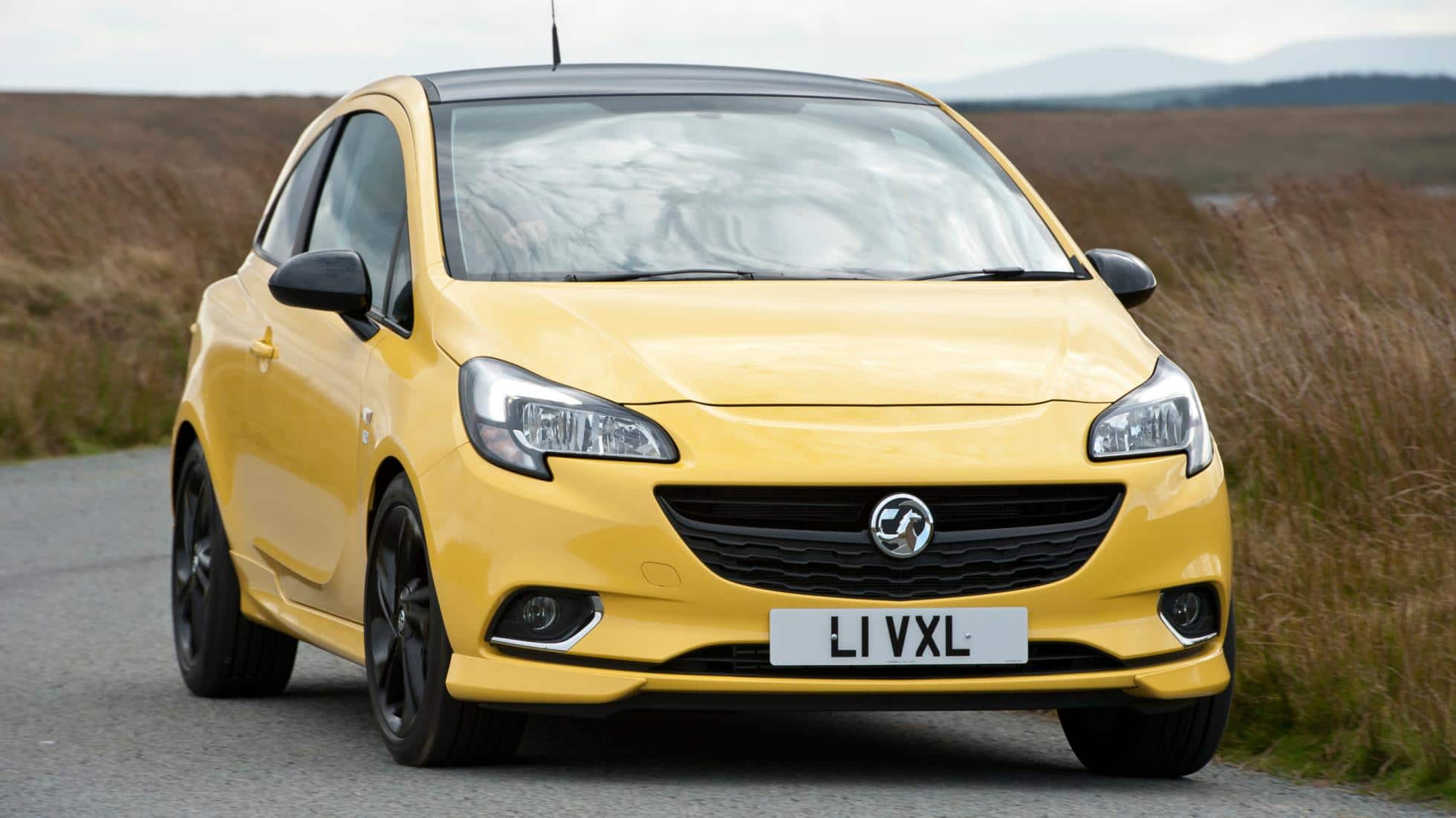 The Corsa has always been an extremely popular option for younger and/or city drivers, and the latest edition looks like it’ll continue to be so. However, it is unrecognisable in comparison to the earlier versions of Vauxhall’s widely-admired model.
Borrowing certain design elements from the slightly more up-market Ford Fiesta, the 2017 Vauxhall Corsa is now being described as a “class-competitive contender” by Top Gear.
Its design has been “sharpened and tidied up”, while a sportier engine and finely tuned steering and suspension make it the “best Corsa ever”.
Best Electric Cars 2017
The electric vehicle market is ever growing, with many automakers seeing it as the future of driving. Jaguar Land Rover, among other big auto brands, have committed to solely producing electric and hybrid vehicles from 2020 onwards.
But what are the best 2017 models currently on the market, or at least soon to arrive onto the scene? Find out by reading below…
Jaguar I-PACE 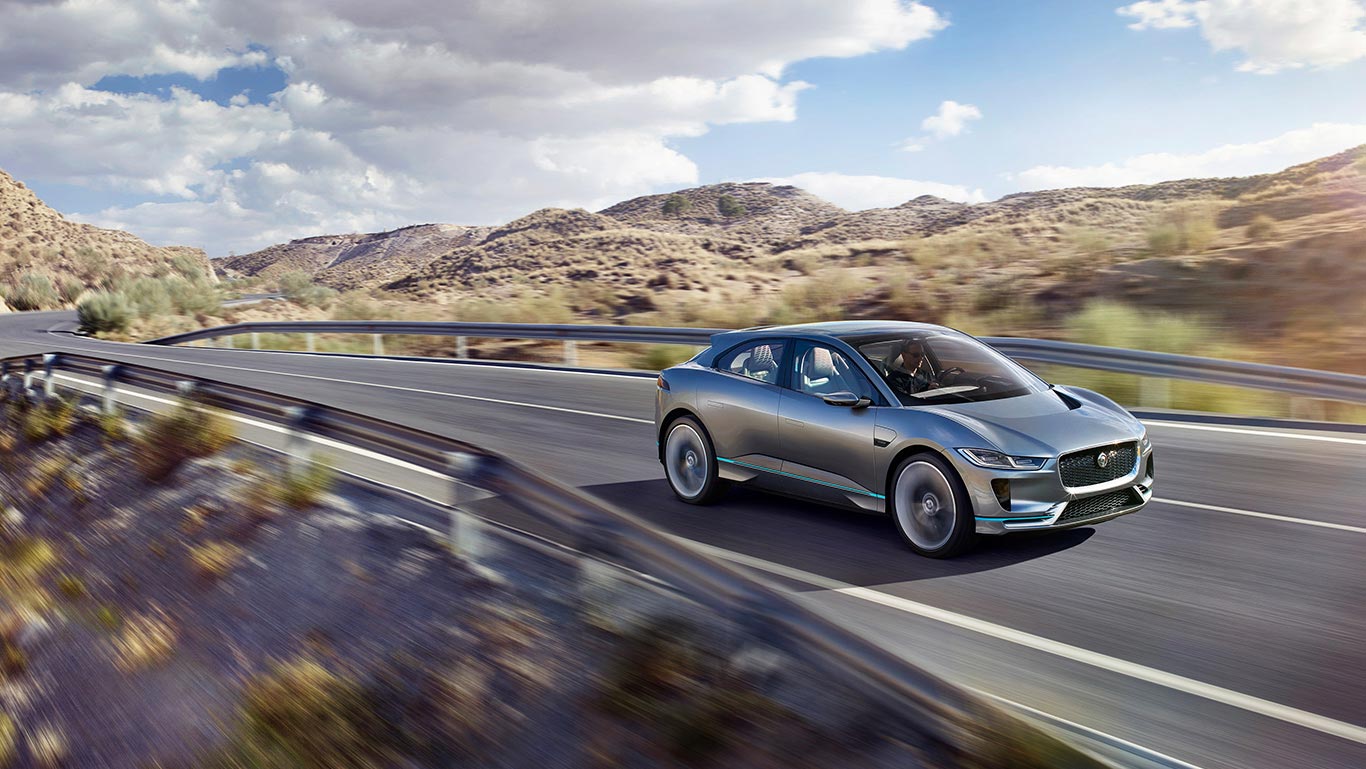 Although strictly not available until later this year, the I-PACE was tested by a select amount of extremely fortunate people in the industry in 2017.
What started as a simple concept, will soon make history as Jaguar’s first ever electric vehicle. The British automaker is calling it “a pioneering future in electric vehicles” and “a striking glimpse of Jaguars to come”.
We hope you’re all as excited as we are to see this stunning vehicle on the roads!
Electric Range Rover & Range Rover Sport 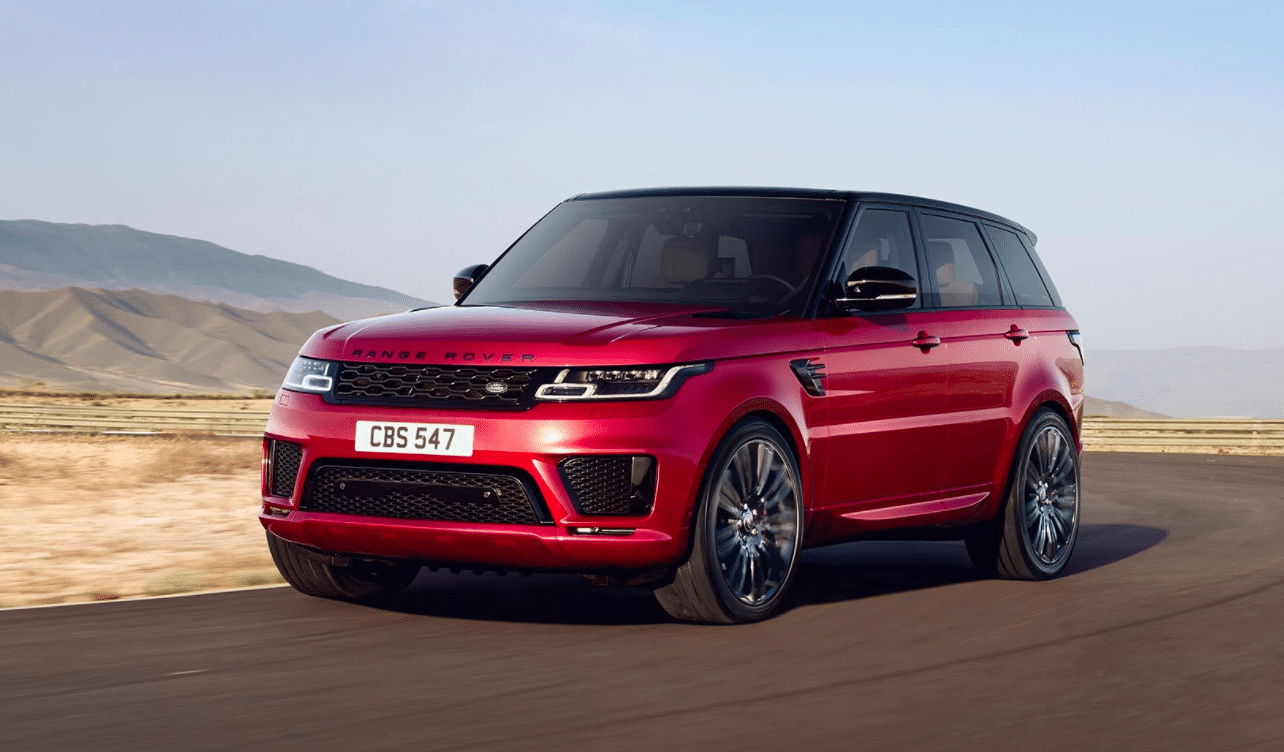 Sticking with Jaguar Land Rover, we have the New Range Rover and Range Rover Sport, both of which will have a PHEV (Plug-in Hybrid Electric Vehicle) option.
Land Rover is already describing these editions as “the ultimate Range Rover”, and quite frankly, it doesn’t get more exciting than that! With maximum levels of refinement and packing all of the iconic British brand’s incredible tech, these models are certainly worth waiting for.
Renault Zoe 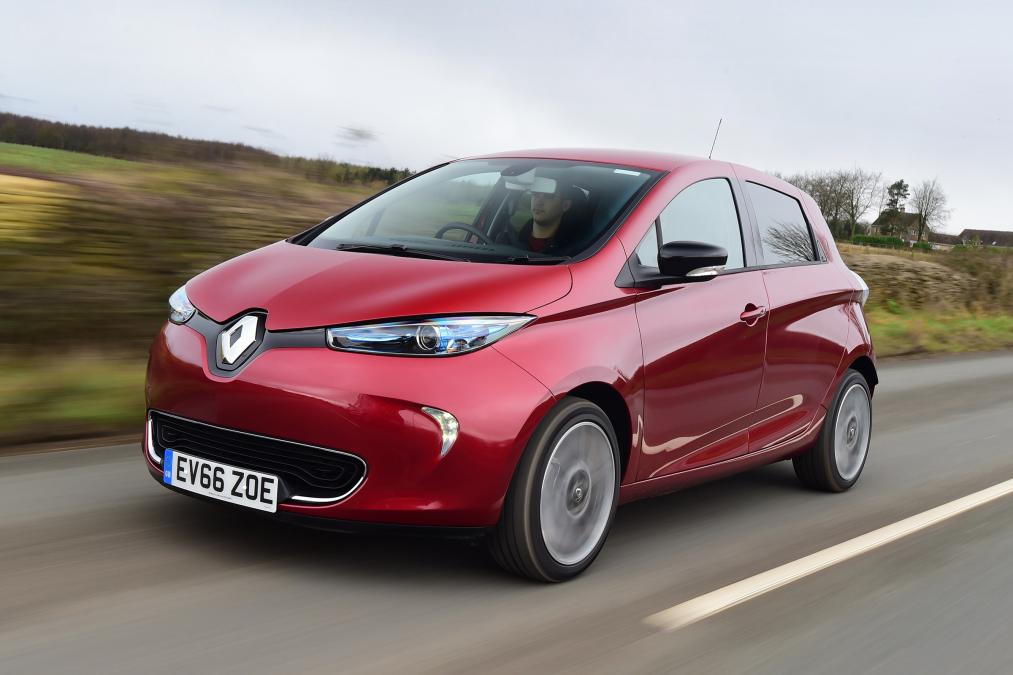 The Renault Zoe EV 2017 is capable of driving between 120 and 180 miles on a full charge, which may not seem a lot, but it remains a very popular, mainstream EV option thanks to its affordability and fast-charge capability.
Its interior is practically designed for everyday use and a contemporarily styled body certainly contribute to its popularity.
Get the best deal on a new 2017 car
If you’d like to look into getting behind the wheel of a new 2017 car or want one to represent your business, get in touch to hear the lease deals we can provide. We can offer any UK vehicle and model!
Alternatively, if you would prefer to wait for the cars coming out in 2018, we have provided a useful guide that’s definitely worth checking out.