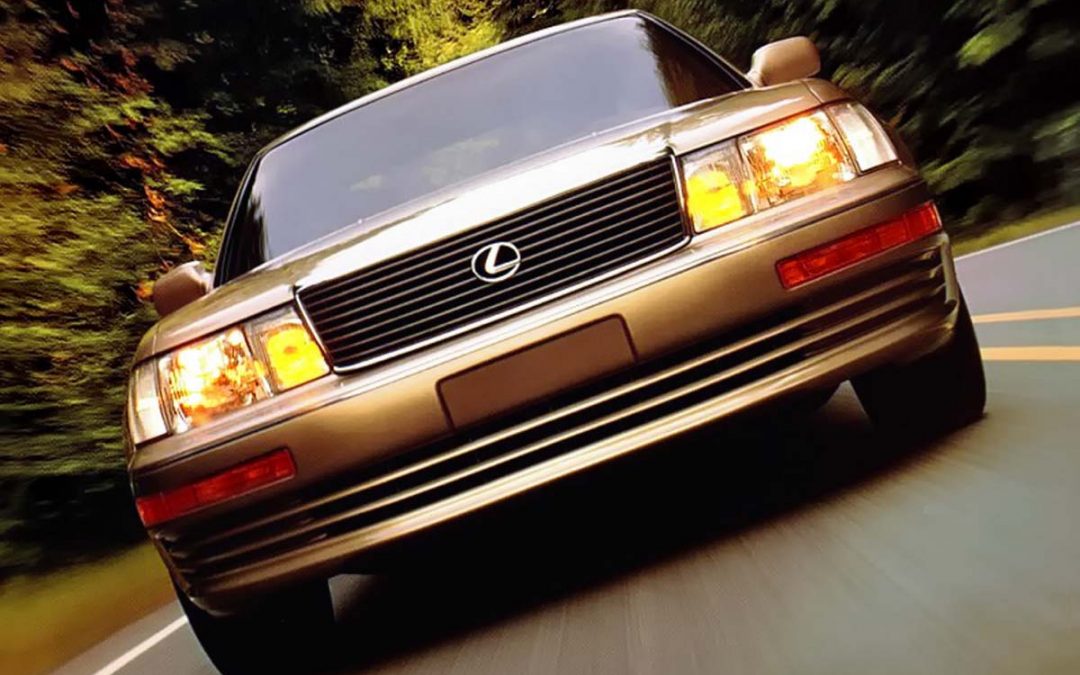 Lexus is the luxury vehicle division of Japanese vehicle maker Toyota, and is Japans largest selling make of premium cars. In this blog, we run through the brief history of the luxury brand.

The Lexus brand was created at the same time Japanese rivals Nissan and Honda created their own premium brands, Infiniti and Acura. In the 1980’s, Japanese car manufacturers exported their more expensive models to the U.S due to voluntary export restraints negotiated by the Japanese government and U.S. trade representatives that restricted mainstream car sales, hence the creation of these luxury brands.

In 1983, Toyota chairman Eiji Toyoda issued a challenge to build the world’s best car. The project, ‘Flagship One’, developed the Lexus LS 400.

The F1 project was completed in 1989, resulting in the LS 400, a rear wheel drive car with a with a brand new 4.0 L V8 petrol engine, which was debuted in January 1989 at the North American International Auto Show in Detroit. The car was launched in dealerships in September the same year.

1990 saw the first full year of sales for Lexus in the U.S, selling 63,594 units in total from the LS 400 and newer ES 250 sedan. Lexus also began limited exports to United Kingdom, Switzerland, Canada and Australia that same year.

In 1991, Lexus released their first sports coupe, the SC 400, sharing the same engine and rear wheel drive design as the LS 400. This was followed by the successor of the ES 250, the ES 300, which went on to become their best seller. Lexus ended 1991 as the top selling premium car import in the U.S, and by 1992 had increased it’s prices in line with other premium American brands, meaning the base price of the LS 400 rose by 18%.

1993 saw the launch of the medium sized GS 300 sports sedan, with the second generation released in 1994. In 1995 sales were threatened by the U.S. government’s proposal of 100 percent tariffs on upscale Japanese cars due to the U.S – Japan trade deficit, although normal sales resumed when Japanese manufacturers agreed to bigger American investments.

In 1996, Lexus released their first SUV, the LX 450, followed by the third generation ES 300 sedan, and the second generation GS 300 and GS 400 sedans in 1997. In 1998, Lexus added the first crossover SUV, the RX 300 to their range, eventually becoming their best selling vehicle. Lexus introduced the IS in 1999, an entry-level sport sedan.

The mid-2000s saw success for Lexus in South Korea and Taiwan as a top selling import brand, and also the Middle East where they were the second highest, and third highest ranking in Australia by 2006. In 2006, Lexus announce expansion to 68 countries to 76 world wide by 2010, including Malaysia, South Africa, Indonesia, Chile and Philippines.

In late 2010, Lexus launched the CT 200h, a 4 door hybrid hatchback designed for Europe. In 2011, the tsunami in Töhoku caused disruption to productions lines, and due to vehicle shortage lost the top spot as a premium brand in the U.S.

In January 2012, they began sales of the firth generation GS 250, GS 350 and GS 450h, followed by the sixth generation ES line in April that year. In 2013, the very first turbocharged vehicle was released, the NX 200t, a five seater NX crossover.

Lexus announce the launch of a rebadged limousine version of the Alphard in 2019, sold as the Lexus LM. That year, they also announced that they would enter the market in Mexico for 2021. 2019 also saw Lexus announce their first ever all battery electric vehicle for 2020.

We have a huge range of vehicles from brands such as Lexus, BMW, Audi, Volkswagen, Kia, Hyundia and much more.  View our selection of vehicles and apply online in just 2 minutes.

Delays on your new vehicle? A short term vehicle lease could be the solution

Leasing a car in 2021 – What are customers expectations?

Car leasing vs buying – 9 reasons to lease over buying